Free Shipping When You Purchase Gut Mate! (US Only)

Selected to support gastro and immune health for infants and children

During childhood, the gut microbiota is developing and is known to contribute to the child’s overall health. Lactobacillus rhamnosus is a natural constituent of the early infant microbiota and is one of the most researched lactic acid bacteria in the world. Clinical studies have shown Lactobacillus rhamnosus DSM 6594 supports a healthy immune system in adults and children. 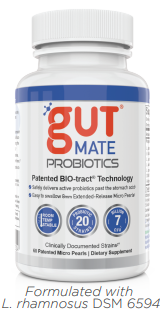 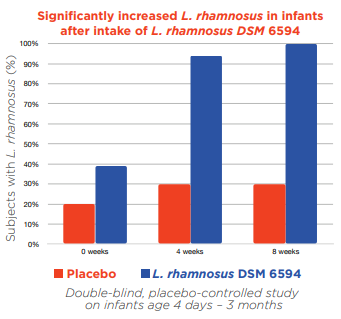 Lactobacillus rhamnosus DSM 6594 is a clinically documented and patent protected strain. Several studies have shown that L. rhamnosus is a natural inhabitant of the intestinal microbiota already in the newborn child, and is associated with improved gastrointestinal health and less fussing and crying.


The recommended dose of 1 billion bacteria per day promotes a healthy gut environment and a strong immune defense in a growing child. 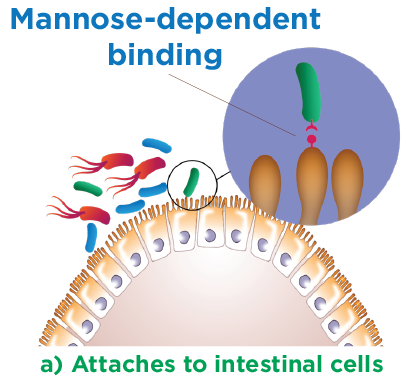 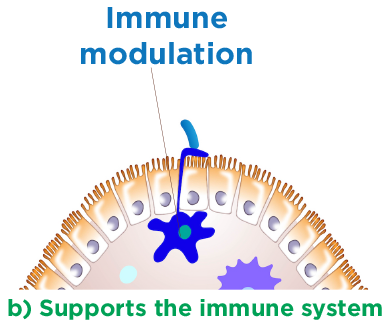 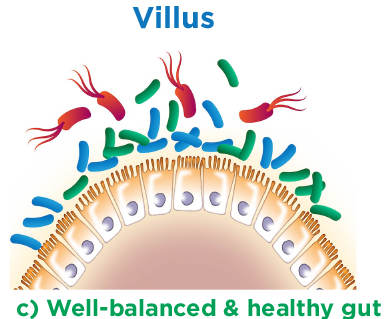 Figure 1. Lactobacillus rhamnosus 6594 is a clinically supported probiotic bacteria proven to survive the passage through the GI tract and attach to intestinal cells (a). It is clinically proven to support the immune system (b), resulting in a well-balanced and healthy gastrointestinal environment.

Translocation of bacteria from the intestine to blood and organs may have detrimental effects. Supplementation of L. rhamnosus 6594 have been shown to reduce translocation in several preclinical studies 2-4.

A preclinical study investigated the effects of L. rhamnosus 6594 given in combination with barley. The result was increased levels of short chain fatty acids (SCFA)5, important for regulation of the metabolism, maintenance of the gut barrier function and for improving the overall GI environment 6.

In a randomized, double-blind and placebo-controlled clinical study, L. rhamnosus 6594 was given to infants of 4 to 83 days of age, for a total duration of 8 weeks 7. The results showed that intake of L. rhamnosus 6594 already from the age of 4 days is safe and well-tolerated. A decreased incidence of acquiring upper respiratory tract infections (URTI) was found in the group receiving L. rhamnosus 6594, compared to the placebo group. The amount of Lactobacillus, as well as L. rhamnosus per se was significantly increased after both 4 and 8 weeks intake (Figure 2).

In another study on infants, the colonization of several Lactobacillus was studied 3. The results showed that L. rhamnosus was the most common lactobacilli in all the included infants (n=112). Moreover, breast-feeding and vaginal delivery was associated with a more pronounced dominance of L. rhamnosus during the first 6 months of life. 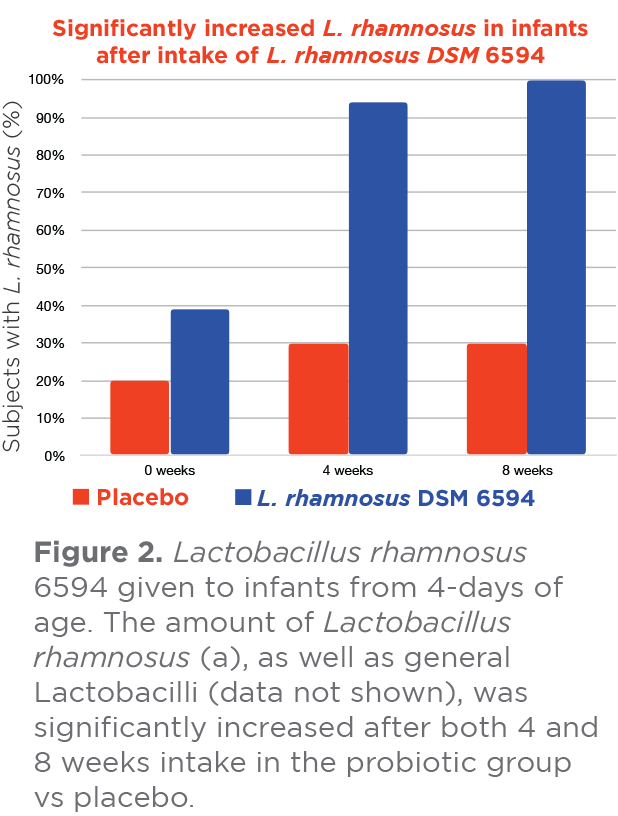 A 2-week, double-blind and placebo-controlled clinical study investigated the effects on the innate and adaptive immune system after intake of L. rhamnosus 65948. The results were down-regulation of several parameters of cell-mediated immunity, as well as an increase in the anti-inflammatory cytokine IL-10. The conclusion of this study was that L. rhamnosus 6594 supports the immune system, preventing a too strong immune response and promotes anti-inflammatory responses. Thus, protection against infections and several diseases such as allergies and colitis can be achieved.

These statements have not been evaluated by the Food and Drug Administration. This product is not intended to diagnose, treat, cure or prevent any disease.